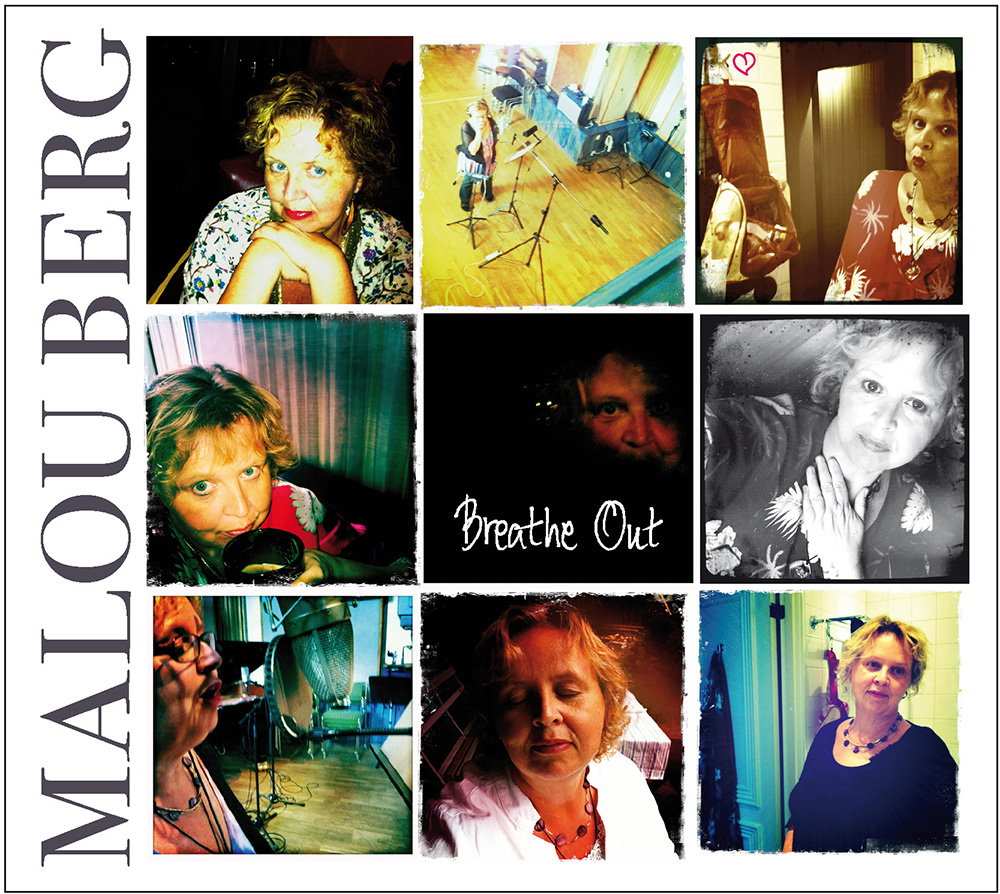 Take a moments break
from all your musts and have to’s
Let the music soothe you
give some peace and quiet
Relax, cool down, let go
and breathe out…

BREATHE OUT consists of recycled and remixed songs from the albums of ‘The Pleiadian Suite’. Not only did we remix the music, we also stripped the songs of their original arrangements and added a huge string ensemble, harp and light percussion. We kept my vocals and the choir (the choir was expanded on a couple of songs to get an even better sound) as originally recorded and the language that nobody understands is still there…

And we re-recorded one song, ‘Nu faller ljuset in i mig’ (Beam of Light), an old favourite of mine which I recorded a loooong time ago, about eight albums back… oh how time flies when you are having a good time..;-).

It has been both fun and inspiring for me to work with this project. I hope that you will enjoy the music and that it will make you relax, feel good and breathe out for a while.
Malou

I guess that never have so many people been involved in a recording as with BREATHE OUT. And, quite frankly, it ought to have been exactly the opposite, considering that we picked out songs from the HOYA, OMINE, AMAONA and ALIGNMENT albums. They were already recorded and now all we had to do was change them a little … And in order to be able to do this small musical restyling, lots of people had to be involved! Hahahaha – nothing will ever be what you expect it to be.

This was how it all went. For quite a long time I had entertained the thought of making a Christmas record and my idea was to write Swedish and English texts for a selection of songs from the Pleiadian Suite and utilize the backgrounds already recorded, sing in a new lead and that was it. Mix it all together. Ready! In order to test my idea, I wrote a Swedish text for Breathe Out (from the Alignment album). The tune was not cooperative, to say the least of it… trying to find sentences with meaning and coordinate them with phrases with so few notes, at such a slow tempo – that was no piece of cake, let me tell you! I was used to working in a flow and here I was moving in a gale head wind!

But as I am both persistent and stubborn, I succeeded at long last and recorded it so that we might hear if it was a good idea or not. Unfortunately it was not a good idea. ‘This is no good, Malou,’ said Lasse. ‘If you want to sing using Swedish texts, you will have to record new backgrounds. Redo the whole thing from the very start.’ Then I put the whole thing in cold storage and gave up.

But immediately after this, during the Midem Trade Fair, Iggy turned up with a proposal. ‘Malou, why not make a Christmas record? Use tunes from the Pleiadian Suite, keep the choir, solo and language. Strip the arrangements and add the Christmas-kit. It won’t be a traditional Christmas record, but it will spread peace, relaxation, calm and joy.’ I just stared at Iggy as if I had been struck all of a heap. In his presentation of the idea, he had undone my most difficult knot: the text. And not only had he undone it, in his opinion the text, the incomprehensible one, was one of the assets and could not be removed.

The idea was removed from its cold storage and was accessible again. ‘You need a champion to help you with this,’ Iggy had said and I immediately thought of Lasse Nilsson at Nilento who had made more than thirty Christmas productions. When I introduced the idea to him, he started out by moaning, ‘I have made soooo many Christmas records that I had just decided never to make another one. It must be something really extraordinary!’ However, it then occurred to him that this was going to be no ordinary Christmas record and all of a sudden, the ball started rolling.

The Christmas-kit?? What is the Christmas-kit, that we were asked to add to the music? My very first thought and feeling was strings and when I said that, Lasse came up with ‘a harp’ – and that was how it was going to be: strings and harp. More choir for some of the tunes in order to create an even better, broader sound which was more in accordance with those on Omine.

We chose tunes and without our intention, the result was some tunes from each album. And then we added one tune that did not at all belong to the Pleiadian Suite: ‘Nu faller ljuset in i mig’ (Now the light falls into me), the title song from my very first gospel album that was released on LP in 1984! Oops, how time does fly… Since the master recording for the original version does not exist any more, we made a new recording of that one. Which was fine, because I have made another text at the end as this suits me better. I never thought that it would fit in with the other tunes, but for some reason it works! (And now my appetite has been whetted concerning the last record of the series. So watch out, we are going to crack the limits!)

Lasse stripped the arrangements of everything that could be taken away, without losing the flow of the music. After that we sent the stripped ‘song-skeletons’ to the arranger Tormod Tvete Vik who made the most beautiful arrangements imaginable, for strings, harp and piccolo trumpet.

This time Lasse took care of much more of the production that I did, and it felt wonderful for me who was in Hawaii for five weeks during the spring. Two days of recording with the string ensemble were pure heaven for me. I love the sound and now I was embraced by it. And then on with the light, pure percussion, tiny bells (a real Christmas-must, isn’t it?) – bells here, bells there…

The choir completed some of the choir arrangements and I recorded the new song and made a few corrections at a couple of places in the tunes. Some songs were changed in form, some were given new endings, some were shortened. But the tune and the choir are true to the original.

When I was going to write the credits, I realized just how many people had been involved in these songs, partly there were all those who had cooperated at the first recording and partly all those who participated now. There were soooo many that I could not make an eight-sided digipak as I have done earlier. This album had to be published with a CD-booklet.

This recording was light, easy and uncomplicated. Lovely and playful, fun! All the difficulties were before we started, because when it got going, everything went completely smoothly.

My most heartfelt thanks
to everyone involved in this album.
The collaboration with Lasse at Nilento
worked out fabulously well (as always),
was so easy and full of joy.
It was wonderful to meet,
work with and listen to fantastic musicians
as they played their instruments
with such a great skill
and so much heart.
Together
we made this album possible.
Malou

These wonderful musicians participated in creating ‘Breathe Out’:

And these great musicians played at the original recordings:

‘CD-TIPS’
Malou Berg is gifted in so many ways – she is an actor, artist, singer and composer all rolled into one. Her qualities in the two last-mentioned categories are evident beyond any doubt in the four albums (or maybe five, I am not quite sure) she has published. And not least her latest “Breathe Out”. I do not really know how to characterize the music of Malou but, on the other hand, etiquettes do not feel important at this moment. At any rate she has got a fabulous voice and her tunes are, to be quite frank, incredibly beautiful.

Homage also to all other participants, not least to Lars Nilsson, sound technician and producer, from the Nilento Studios in Kållered whose special sound is an important and consistent part of Malou´s album.

The idea behind ”Breathe Out” was to make a record for Christmas to help the listener find the way back to the peace and quiet we all need so very badly. Consider the idea realized. And then some.”

At this time, a whole row of albums has been published – The Pleiadian Suite. Breathe Out consists partly of re-mixed songs from the Pleiadian Suite albums, songs that have been stripped and changed. However, the incomprehensible and yet so very lovely language has been preserved.

Strings and harp as well as a piccolo trumpet have been added and the record is not quite “incomprehensible” as it even includes songs in both Swedish and English.

I am not quite sure why, but I have liked Malou Berg ever since the release of the first record of the Pleiadian Suite – Hoya. It might be because of her voice which is extremely nice to listen to. It is meditative and yet encompasses a lot of both life and music. That is to say that Breathe Out does not differ from the earlier albums, perhaps the style has been even more developed.

So – Breathe Out is a different Christmas record and that is not completely wrong at this time.
Lennart Götesson, DalaDemokraten