THE PLEIADIAN SUITE – MALOU ABOUT HOW IT ALL BEGUN

I was asked by the Östhammar Musikvecka (the musical week of Östhammar) if I could hold a three-day choir workshop, day three to terminate in a concert. This was directed at “anyone” – that is to say anybody with no experience of either choir singing or note reading. I thought this was a great challenge and started to work. I wanted songs that were fun, a joy to sing – songs with something special. Hoya saw the light of day. All the music was very physical – the themes were repeated two, four or eight times without any fancy variations or other musical tricks. Everything to make it easily accessible and easy to grasp.

But I made one fatal mistake: I removed the text and replaced it by sounds that were fun to sing, sounded good, were ”easy on the tongue” and which nobody understood or could relate to. I truly succeeded in confusing all the poor choir-singers. But – using tricks, support and help along the way – we managed the concert and it was a success!! 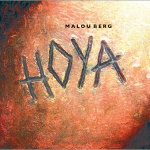 When I recorded HOYA, we did it bit by bit. Producer Bo Westman made a click-track from my demo recordings and later on we based our subsequent recording on this. This was my first co-operation with sound technician Lars Nilsson. We started with all the drums. African percussionist Kristina Aspeqvist built up rhythmic jigsaw puzzles which we recorded in the kitchen of my mom’s summer cottage (the mixing table was placed in the bedroom). The choir which had the main part in HOYA was recorded in a church outside Stockholm and we made all the solo songs and other song parts in the studio… we built HOYA bit by bit. 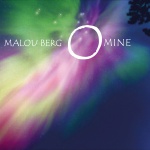 It was such fun! I was so inspired by the work with HOYA that I wanted to try again and thus OMINE was created. My intention was that the songs were to be simultaneously both meditative and groovy. The language developed from being only short words and cool sounds to include both sentences and longer phrases. It was confirmed to me that the language was based on something Pleiadian but, for everyday use, it was only named “The Old Language”.

The words sort of built a nest within me and I could feel when it was right. I am not the type to build a song bit-by-bit and for this record I collected some musicians I had dreamed about so that we could record it all in one go, swinging together: Lars Danielsson, bass and cello, Manuel Iman, guitar, Xavier Desandre Navarre, percussion. They came from different parts of the world, shared their musicality and energy freely and we recorded everything perfectly. 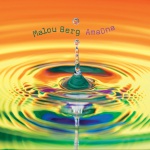 After HOYA and OMINE I thought that this chapter was finished and done with. Now I should dedicate myself to other music and a bunch of new songs knocked on the door right away. They were folk music, lively and joyful, the AmaOna tunes.

Then I had the idea to mix my Pleiadian words with the English texts by Susanne Wigforss. Fiddle and accordion were given more prominent parts and the choir had to recede a little. For some tunes I wrote choir arrangements for male choir and they sang so beautifully that I simply swooned. The songs were arranged in cooperation with the musicians and we avoided click-tracks as much as possible. Most of the time we were in total agreement but sometimes there was a stink to high heaven when we disagreed completely. Passion is great – no? hihi

After AmaOna I was convinced that the suite was done and I prepared for the release of all three albums in a box, but my international partners all made a “thumbs down” and the idea was postponed … for the time being … 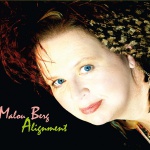 For some years I had been singing freely, had sung the words and notes that came to me when I opened myself and allowed them to come as they wanted to. I had acquired some Tibetan singing bowls and often sang together with a singing bowl which was lying resonating with a long note. This was a very healing experience for me, it was nothing I wanted to record but something was clamouring within me and before I knew where I was, I had presented this idea to Lasse at Nilento and – at his request – had asked Xavier if he would record together with me. And to my amazement he had accepted. I had even read about the healing frequencies of the ancient Solfeggio scale and decided that all the tunes should be coordinated to this. Alignment was recorded directly in the studio, that is to say all the tunes except three were created the very moment they were recorded. Both their structure and their form differed totally from anything I had done earlier and this recording was so quiet, so intense and so very inspiring. A flow of love, energy and unity. 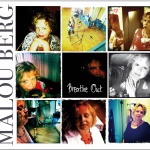 BREATHE OUT – Recycled and Remixed

Christmas songs in Pleiadian?! Oh yes! We picked songs from the first four albums in the Suite. The songs were redressed, with wonderful strings and harp (gorgeous amazing harp!! I just love it), more choirs, a lot of dings and dongs and the whole christmas-kit. Plus I re-recorded “Nu Faller Ljuset In I Mig” (Beam of Light), a song from my first gospelalbum in 1984. (Quite a long time ago.. 🙂 I took the opportunity to rewrite the lyrics in the ending, so the song now feels more whole and in alignment with who I am. BREATHE OUT – a compilation.

Here it should have been the end of story, the suite completed. But it didn’t turn out that way. Before I knew what hit me, a new idea dawned on me.. 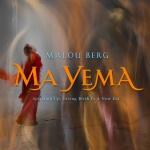 MA YEMA is the 6th album in “The Pleiadian Suite”, with songs to relax to, or get energized by, create peace and quiet, to feel good. Feel-good music 🙂

It began with HOYA, with the element of Earth, Body. Followed by OMINE, Heaven, Soul. The third album in what was expanding into av suite of albums: “The Pleiadian Suite” was AMAONA, Water, Emotions. Coming next was ALIGNMENT, Ether, Intuition. BREATHE OUT, an Christmas album with songs from all the albums in new arrangements, came after that. With MA YEMA, Fire, Energy, the albums focused on the elements in “The Pleiadian Suite” is concluded. It isn’t the hot, devastating, destructive fire that we meet in MA YEMA, but the warm, embracing and life giving.

The origin to MA YEMA was that I wanted to record a longer piece of music, at least 20 minutes long, that would be as an inner journey. Together with Xavier on percussion and Thomas on keyboards, we picked up the way we recorded on Alignment.., where the music was created the moment Lasse hit the recording button. We had nothing to hold on to, no structure, no melody, no lyrics, no form and no initial idea. The songs was born right there and then. My vocals are the original ones, I haven’t re-recorded or repaired anything of it. But what we did do, we added choirs and some other instruments afterwards. expanded the sound. From “Spiral”, as we titled the little more than 40 minutes long inner journey, we extracted some of the parts or songs, that would work stand alone, on their own. And recorded a couple of more songs. Tada! Ma Yema was born! Ma Yema was recorded already in 2012, and mixed in 2015, but besides that it was a non-active project. My personal life was so demanding during those years and I had no energy left for anything besides that. Ma Yema had to wait for better times to come. And better times.. they arrived in 2016.

Now I have gone full circle. All element has their own, designated album and I have returned to the same place I started at, but a little higher up in the spiral. Spiraling up!

In spring 2016 I returned to Nilento Studios, for a new recording. This time it was my newly composed Light Songs, (yep, with Pleiadian lyrics as usual). It was a very inspiring and exciting time for me. The Light Songs have a different purpose and another way to be used, than the songs on the other albums. These songs are meant to be sung together with the audience and are also extremely long. I recorded 16 songs, ending up with about 3 hours of music (that will give you a hint of the length of the songs) ;-). We are mixing the Light Songs during the fall 2016 and they are scheduled to be released next year, 2017.

The albums of the Pleiadian Suite have received a lot of attention in other countries (who would have thought that when I began with HOYA??)
and they are, besides Sweden, released in Taiwan, South Korea, Austria, Germany and Switzerland.
Maybe there will finally be a box with The Pleiadian Suite? Who can tell? We’ll just have to wait and see how everything unfolds.