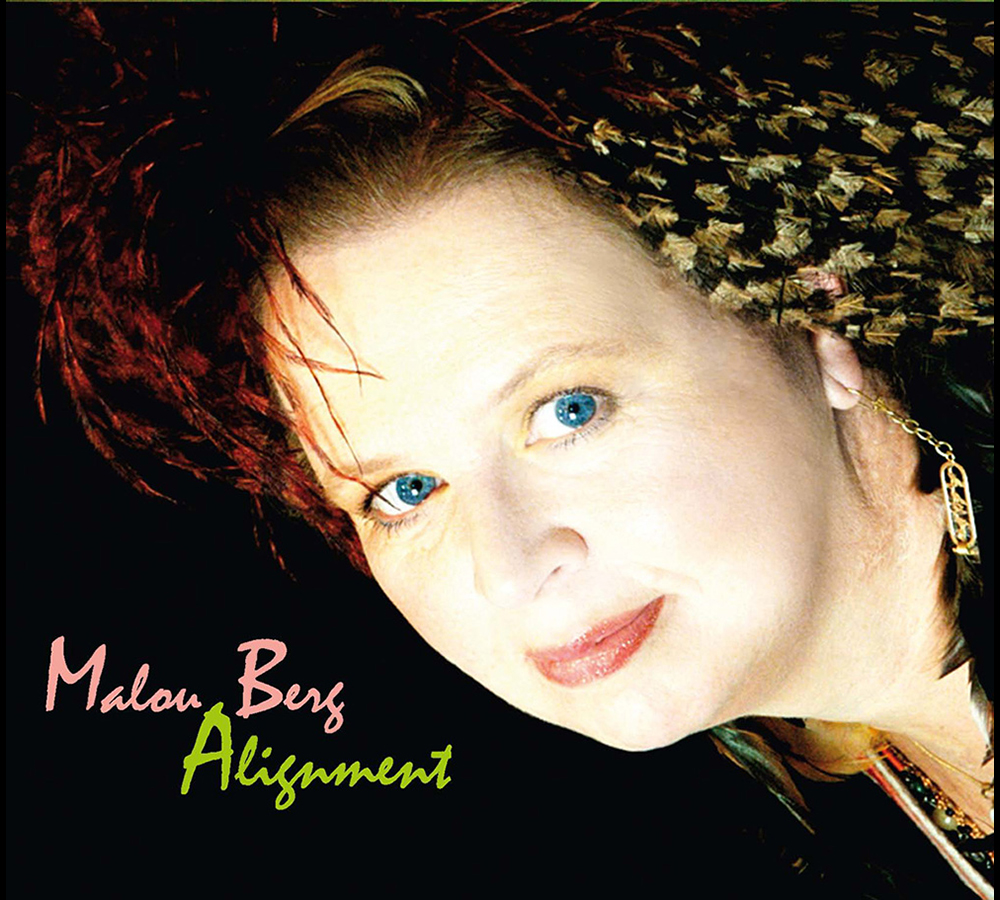 UNT 29/10-2010 :
“WORLDMUSIC – Malou Berg, renowned in Uppland, Sweden, continues to investigate musical borderlines in her fourth album of the Pleiadian Suite. Now with songs in her own language for which she has been rewarded the Word Prize of the Swedish Word Festival (Ordfestivalens ordpris). This time Malou Berg bases her music on the tones of the ancient Solfeggio Scale and she does this in co-operation with Xavier Desandre Navarre, French percussionist and multi-instrumentalist.”

With her new album ALIGNMENT, Malou Berg continues to compose music that crosses all borders and she began the release with a triumphant concert at The Boulevard Theatre in Stockholm on September 7, 2010. Alignment is the fourth album in Malou Berg’s ground-breaking Pleiadian Suite. In 2009, she was awarded The Word Price at the annual Word-Festival in Sweden for her language in this song suite. That same year, Malou was invited to be the main feature by the South Korean annual HwaEom Spirit Music Ritual.

The music in ALIGNMENT carries the listener to new worlds that inspire, uplift and release in a magical way. A musical rainbow of vocals and sounds of crystal and Tibetan bowls, the beating of drums and soft, dancing melodies. An album that is both meditative and exciting.

Nilento Studio in Gothenburg where we spent one week in September of 2009 with the sound genius Lars Nilsson at the mixing table.

Xavier and I agreed upon an intention, a word, a phrase on which we both meditated for a minute or so, and then we made the recording without any bias whatsoever. We had no form, no thoughts concerning the contents of the song, we just opened ourselves, listened inward, synchronized to each other and allowed our intention and mutual flow lead the music into its own blooming.

Thomas Hellsten accompanied us on our journey on keyboards. The songs became like a walk in the forest where you see the trees around you while the forest itself is constantly changing with small and large variations.

The language is my own Pleyadian which is such a joy to sing. After this we made some extra sound effects but nothing was basically changed. No retakes or improvements – both music and song are completely original.

Everything happened in the moment. Our primary phrase, or intention, was later taken to be the title of each song. Eight of the songs were recorded in this way.

Read more about the ancient Solfeggio-scale here:
Miracles and Inspiration   Light Within

From my heart to yours

When I heard about this scale for the very first time, my curiosity was roused. What? What is this? I have been into music my entire life and have never heard of this before?!? I was shaken, that such important information had not reached my ears before… Because we are not talking about the solfeggio I learned about at the music schools. There it was only calling the tones by different names, but they sounded the same.

Now I was told about an ancient Solfeggio where the tones were based on other frequencies than we were so used to, that we considered them to be the “right” or “correct” scale. Frequencies that vibrated in harmony with our bodies, that had great healing and balancing effects. All this was knowledge which had been accessible before but, like so many other types of esoteric knowledge, had been hidden from us humans. Knowledge that gave us force and power to create our own lives.

That was to say that the Gregorian songs were not only a way of singing together, they used the ancient scale – sometimes named the Holy Scale – as a means to heal themselves, both body and soul.

Later we introduced a common, exact placing of the tones on the frequency scale (and it is not even possible to tune according to this, for if you tune a piano absolutely correctly, it sounds awful. If we talk about a tempered piano, it means that the frequencies are modified or, to be quite frank: the piano is out of tune but it sounds as if it were tuned. Interesting isn’t it? J) However, according to this agreement, based on the piano, the tones are dissonant in relation to the ancient scale. And, since the ancient scale had a healing power, our traditional scale, which was dissonant in relation to it, also had a dissonant effect on us.

We are talking about ten-to sixteen cents here or there, but they are important. Between two half-tones is 100 cents, 100 different and certain frequencies, different steps between the tones. In principle, one can say that a sharp, trained ear can differentiate between 10 cents whereas an ordinary listener may not even be able to hear 20 cents difference. We may not hear it but our bodies perceive it anyway. At 40 cents it sounds really terrible.

I read about an experiment that had been made with damaged DNA to which had been sent (528 hz) the so-called Miracle frequency of the Solfeggio scale into the container with the damaged DNA-threads, after which the threads coiled up and were healed.

When I read about this, I was completely fascinated and bought a set of tuning forks with the nine different frequencies that had been discovered until then. My inner feeling tells me that three more frequencies will turn up, they have just not been found yet. Or they are still hidden… we will just have to wait and see.

Well, I started to check my Tibetan singing bowls and my crystal bowls with my tuning forks. I had been giving a lot of thought to the problem why the bowls were not in harmony with the 440-tuning. Why were both old and new bowls out of harmony with our scale??

That was it, I finally had my answer.

That was when I decided that all the songs of “Alignment” were to be recorded in accordance with the ancient scale. That is to say that if the key was, for example, C-major, the instruments were to be tuned so that the C above middle C was in alignment with one of the frequencies as the Solfeggio scale.

My God, what a tuning and reasoning arose when we played the three ordinary songs that had both form and key or when the keyboard had to be tuned according to one or the other of the bowls. And then we had to add stand-up bass or cello. “Did you say 16 cents? Is that up or down?” An interesting observation. Many orchestras today strive to have the orchestra in 443 hz instead of 440 hz. When you tune in 443 hz, you even get 528 hz, the ”miracle frequency” into the bargain, so to speak. Subconsciously we strive towards balance and healing. Surely interesting, isn’t it?

Would you like to read more about the ancient Solfeggion scale, go here: www.miraclesandinspiration.com/solfeggiofrequencies.html
www.lightwithin.com/SomaEnergetics/2About_Solfeggio.htm

WORLDMUSIC- Malou Berg, renowned in Uppland, Sweden, continues to investigate musical borderlines in her fourth album of the Pleiadian Suite. Now with songs in her own language for which she has been rewarded the Word Prize of the Swedish Word Festival (Ordfestivalens ordpris). This time Malou Berg bases her music on the tones of the ancient Solfeggio Scale and she does this in co-operation with Xavier Desandre Navarre, French percussionist and multi-instrumentalist.

The legend has it that the ancient Solfeggio scale contains healing power. I am not going into any deeper music-theoretic interpretation but content myself with ascertaining that, compared with our Western scale, some notes are higher and some lower, that is to say that the distance between the tones of the scale differs. A scale with healing powers, sounds of Tibetan singing bowls and crystal bowls, miracle frequencies etc.

There is an incredible amount of mumbo-jumbo on Malou Berg’s latest album “Alignment” which she has made in cooperation with the French percussionist Xavier Desandre Navarre, much too much for my taste. I am going to be kind and give the record a “2” and also observe that it contains rather efficient meditative music. I leave the belief in the healing powers of the Solfeggio scale and the songs to others.
Mikael Bengtsson

Malou Berg is a singer who experiments and improvises with floating, meditative music. The result is ambient world music, music that won’t fit in any specific category.

Malou Berg’s record “Alignment” is magical. At least that is what it says on the cover, several times. With the emphasis on song and Tibetan crystal bowls, Malou Berg and her musicians improvise in eleven meditative and enthralling tunes. The language used is Malou’s own “Pleiadian” and the notes move within the “ancient” Solfeggio scale which is claimed to have healing powers.

The music is truly gentle, flexible and pleasant to listen to. I like the record. However, I do not like the way it is presented. I listen a lot to this type of music, I use it for yoga and meditation and nothing keeps me further away from a potential purchase than slogans that contain words such as HEALING or MAGICAL.

Why is that? Because it is completely unnecessary to use this kind of language. In my opinion, all music that has been made with both soul and heart is magical. Music that flows out of the human being into the world (improvised music) is healing. The making of music is in itself both healing and magical as we use the body, the temple, we have been given as a loan to spread the joy of living. The Solfeggio scale is undoubtedly ancient and contains “miracle frequencies” but, if you listen carefully, you realize that it sounds very much like a slightly modified penta-scale, which it most probably is.

The point I am trying to make is that the record is beautiful and wonderful to listen to, but the pack and the consequent expectations are unnecessary. Listen unbiased to the record with a completely open mind, in this way you will get to the core of the music without getting caught up in all the things around you.

Meditative improvisation of songs in a mediaeval scale. Malou Berg – singer, musician and composer has many strings on her lyre. She has successfully performed both rock, gospel, pop, cabaret, world music and singing yoga. Her latest project is to realize a suite of songs in the language she herself has invented, Pleiadian, a collection of syllables that are great for singing, according to Malou Berg herself. They even make her focus on the emotions in the music. Now she is presenting the fourth album of this Pleiadian suite. Together with French percussionist Xavier Desandre Navarre, she has improvised her music with no retakes and no intention of any specific content. The sound on this record has been chosen in accordance with the frequencies of the mediaeval Solfeggio scale, a scale which is not “tempererad”. Afterwards such musicians as Lars Danielsson, Ulf Wakenius, Thomas Hellsten as well as others have added their voices and instruments. The result is in the same cross-over style as the Irish Clannad and the effect is as suggestively beautiful as the Indian-world music by North American Carlos Nakai, that is to say it is both exciting and relaxing at the same time.

This CD has truly surprised me in a very positive way. No superficial “New Age-nonsense” emerging from the loudspeakers but a musically and technically sounding most well-produced CD with a gifted and very expressive singer. This is already the fourth recording by Malou Berg from Sweden. She is accompanied by a small group of musicians who contribute to the professional and positive expression left us by this CD. Malou Berg wants to bring the listener with her to new worlds where he may experience inspiration, liberation and exaltation in a magical way. These worlds consist of gentle beats, lovely scales, beautiful melodies, virtual guitar-playing and keyboards – and, last but not least, the enchanting voice of Malou Berg.
Read more here