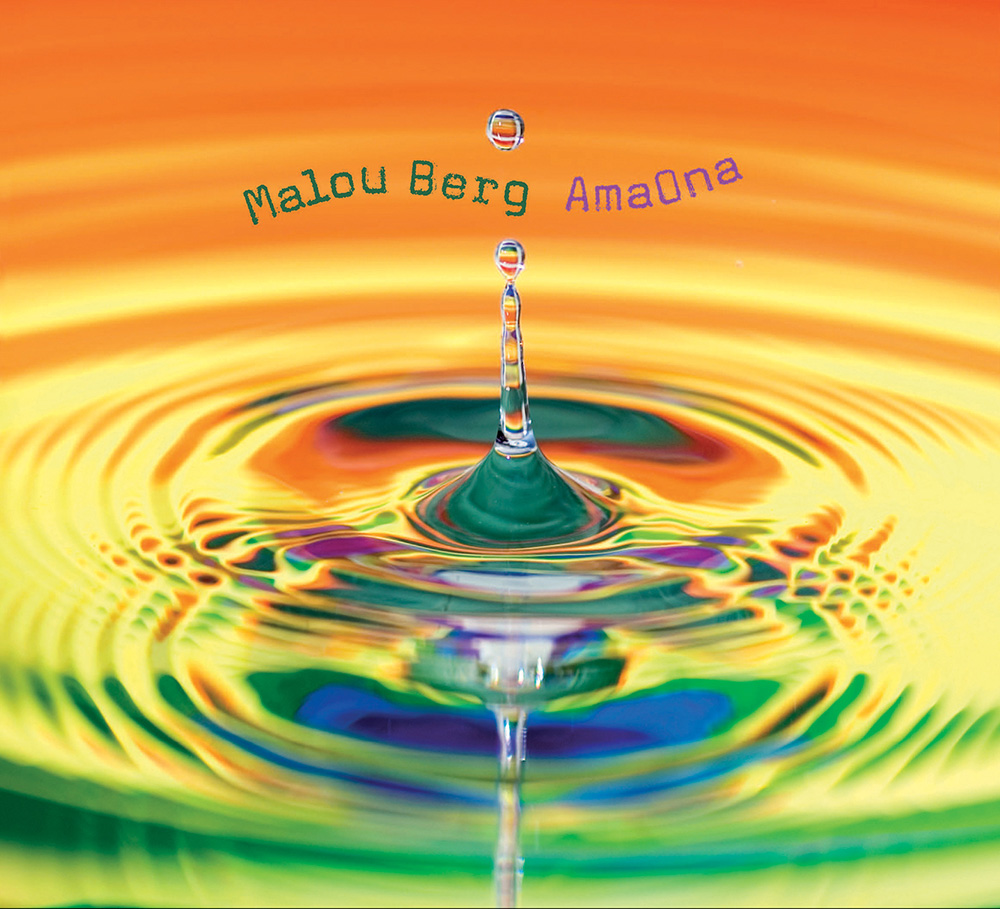 [The album Restful] is divine. It also opened my ears for your album AmaOna, which I have listened to 3 times in a row. Wow, what an album! Thanks Malou for all the wonderful moments I have had in the company of your music and your voice.
Maria K, Östhammar

‘AmaOna’ is the third album in ‘The Pleiadian Suite’ with Malou Berg’s unique World and New Age music. ‘AmaOna’ features songs in Malou Berg’s own imaginary Pleiadian language mixed with poetic English lyrics by Swedish lyricist Susanne Wigforss. The music has its roots in the ancient and also suggests a hint of folk music. ‘AmaOna’ is a musical feast that celebrates life, mankind and mother earth. This is feelgood music that makes you happy.

AmaOna I produced myself together with Lars Nilsson. I wanted it to have a more lively feeling, a feeling of old-fashioned musician and we recorded the songs with all the musicians present at the same time. During one week all the basic work was done. Lisbeth from Denmark made her additional takes and the rest of the additionals were added about one month later. Xavier came to Sweden and used a whole day adding percussion to all the songs as well as a new recording of Oo Wakana. What a feat, I feel completely faint just thinking about it and he too was totally exhausted afterwards.

The entire recording of AmaOna was a piece of cake and if you could call a recording happy, that is exactly how it was. And the result shows it… happy, light, exuberant. It was such a joy to have the male voices and to mix them with the ladies’ choir. Particularly, as in Selam Selamo, where they sing separately, going from the dark sound of the men to the light female voices. Fabulous!

We recorded everything, apart from the Hawaii guitar, at Nilento. As soon as I turned up the very first day of the recording and saw all the lit candles, bowls of fruit and nuts, I knew that this was going to be fantastic.

I have worked with many, to me quite unknown musicians, whose creativity and expression have added so much to the final result. It is a joy to cooperate with great musicians, people with really big hearts. There are so very many memories such as, for example, when Thomas was to make an additional take on the organ and we had only a 30-minute demo. He played until his fingers were glowing, as there was no room for re-takes. We had no time for that, since we only had a 30-minute access to the sound. He gave it all, so much so that the keyboard fell over but one of us caught it and held it while he kept on playing. He is such a fabulous musician, that Thomas! He is even a master of making drum-rolls on the piano.

Johannes’ overtones on the stand-up bass at the beginning of Selam Selamo were soooo beautiful, sounded like heaven to me… and singing together with the violin of Hans is about the most sensual I have done, total concentration, total presence, listening, feeling, flexible. Wow!!

And the memories continue to surface, one after the other, and I feel so blessed to have been part of all this.
* As when Lars made an additional take of the stand-up bass for the already finished recording. I still had no idea that it was possible to do this. However, with a fabulous musician like Lars, everything is possible.
* Or when Jörgen made his magical japp guitar fills for Ayah Nomi and, all of a sudden, time stopped.
* When Lisbeth played the bells for Promise In The Air or thumb-organ for Heart Song, so extremely personal and special expressions.
* The accordion of Stefan for Ayah Nomi and, particularly, the heartfelt ending were completely unique. And I simply love his deep bass voice.
* The tone of Lasse, his playing of the piano at, for example, Song Song… we try once more, a little slower, a little more quiet… we told Lasse. “Sure, you do that”, he answered and switched on the recording (he had been in the game for quite a while, hadn’t he?) * After testing, we recorded it. Unfortunately it was not quite as magical as the test run. “Maybe you would like to hear that instead?” asked Lasse laughing at our amazement. And, as you understand, it is the test run which is on the record.
* Caecilie’s voice… what incredible scope, limitless capacity, depth, width and power everywhere. How many different voices live in there anyway?
* The voices of Ida, Caecilie and myself supplemented each other perfectly and had a lot of power and expression. And when, later on, they were combined with the gentle, clear voice of Jenny, the sound became homogenous.

I long to play these tunes live and get an opportunity to work with these fantastic musicians again.

During the entire process, Lasse has been a genuine supporter. Our cooperation went along and as on rails. It is wonderful that he, apart from having an exceptional ear, is even a competent and experienced trumpeter. He listens as a musician and not only as a technician, we can reason about the music and he has his feelings at the tips of his fingers. That he also has a fine tenor voice improves things… as if that were possible.

It was sheer joy to record AmaOna. A happy recording.

Two of the tunes from the new AmaOna have attracted attention even before the album was released. One tune is used at the Universeum in Gothenburg, Sweden, and the other, Happy Feet Song, was played at the World Figure Skating Championship.
“I have had an enormous response to this music in spite of the fact that it is so unusual”, says Malou.

Imagine a smoothie / cocktail made up of one part Sally Oldfield, one part Sarah MacLachlan, a few drops of Enya, a little “powder of voice” from Mary Hopkin and a pinch of folk music, all served in a beautiful glass with all the right accessories. There you have Malou Berg’s new album AmaOna, filled with ‘World Music’.”.

In the year 1977, Malou entered the Song Contest with the tune ”Åh, vilken sång”. Since then she has left the Swedish language and is now singing many songs in Pleiadian, a language she has invented herself. My deficiency at reading the minds of other people is the cause that I have no idea what she is singing about, but it seems as if she means it.

Earlier I fell flat on my face due to Malou’s world music and, after the new album, I am still lying down, listening and smiling. This new production has a little more tempo than Omine that was dominated by choir and rather suggestive tunes. However, the emphasis is on soul, feeling and calm.

On Monday, Malou Berg from Östhammar releases the AmaOna record, the latest in her Pleiadian Suite trilogy. This record encompasses lyrics in both English and Pleiadian – the latter is a language that came to her during meditation.

This music goes beyond all limits and finds a home everywhere in the world. “Echo” sparkles with joy and energy. It is difficult to sit still to this music and Malou Berg’s beautiful voice. “Echo” is included in the new “AmaOna” album and is played at the Universeum Dig-It exhibition where attracted the attention of both adults and children.

Malou Berg, born in Stockholm in 1950. is a famous entertainer and cabaré artist in Sweden known from both film and TV. As early as at nine-years old, she was accepted at the prestigious Adolf-Fredric School of Music and today she is the leader of her own gospel choir in Stockholm. Malou Berg sings exacting and captivating songs including Pleidian lyrics that remind me of Christian hymns of praise. “Ama Ona” is the third of a multiple CD series. The earlier ones are called “Hoya” and “Omine” and at the moment she is working at number four. “It is totally conscious that she has not included the texts on the CD so that the listener may concentrate completely on the music and thus create his or her very own pictures and stories. While she was working on this CD, the texts came to her in an unknown language during meditations, Pleiadian, which she had never heard before. The Swedish poet, Susann Wigforss wrote the English lyrics for the songs. Songs such as “E man Knie”, “Echo” or “Happy Feet Song” are true hits that get to your very core in their joy. To me “Ama Ona” is a firework display of pure happiness and joy.AmaOna-PRESSRELEASE english
AmaOna 080924 Frontfacese